Nothing is more disappointing that opening a fresh box of chocolates or a deliciously wrapped candy bar and seeing the whitish bloom that diminishes the flavor and texture. We have been there and have gone through the upsetting realization that chocolatiers put their hearts and souls into making a scrumptious treat, only to have the bloom process take over their creations, like zombies robbing the life out of chocolate. Until now.

Unlike other bloom inhibitors and methods, ours is a simple blend of natural lipid compounds, added and fully incorporated into the chocolate mass either at the start or during conching or tempering.

So far we've tested it with our own products. One of them, now in the market development stage, is shown below. 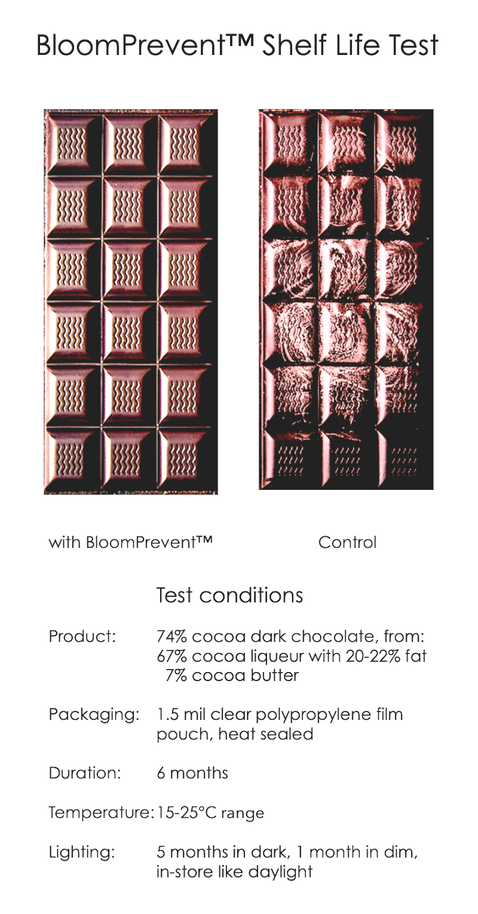 ​
Keep in mind, these are in addition to the other advantages we offer with our healthy, sugar-free, and minimally processed gourmet chocolates:​
​​​​

​
U.S. Provisional Patent status was granted to our invention on 11/3/2019.  Patents are currently prepared for submission to the US PTO, WIPO, and others.
​

We are ready to share our technology with the right partners, through licensing, joint development, and investment in our company. You can contact us here or call us at +1.201.399.4313.
​

want  to  know  more  about  why  and  how  chocolate  bloom  happens?

There are two types of whitish coating that can appear on the surface of chocolate: fat bloom, caused by changes in the fat crystals and sugar bloom, due to crystals formed by the action of moisture on the sugar. Both damage the appearance of chocolate and limit its shelf life.

The first step in this process is degradation in the microstructural heterogeneity of chocolate, resulting in distinct fat crystallization pathways.

Characterized by a white, dusty, grainy coating that appears on the surface of chocolate, it forms when chocolate comes into contact with moisture, in most cases from the air. It dissolves the sugar on the chocolate’s surface. As the temperature changes and the moisture evaporates, the sugar re-solidifies into small crystals, creating the “dusty” appearance of sugar bloom.

When grayish streaks and spots appear on the surface and potentially throughout the chocolate, the culprit is fat bloom.

This happens when chocolate, exposed to temperature swings, such as warm and cool cycles, goes through softening, liquifying, extruding and re-solidifying cocoa butter on the surface and in small, even microscopic internal cavities or layers.

Cocoa butter fat molecules are complex. When the molten chocolate is cooled, molecules can stack on top of one another in different ways, creating a specific amorphous crystalline structure. Each of these structures is known as a "polymorph." 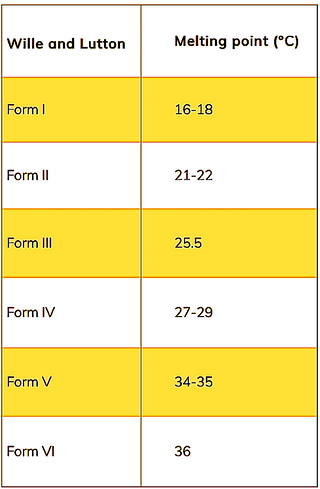 ​Six different polymorphs – labeled from Form I to Form VI – were identified by Wille and Lutton in 1966. They are shown in the table here, along with their melting points determined with X-ray diffraction measurements. ​

The stability of the polymorphs increases as we move from Form I to Form VI. Forms V and VI are the most stable triple-chain polymorphs, whereas the other forms are all double-chain. The transition between polymorphs is the result of several factors, such as purity, temperature, rate of cooling, and humidity.

When tempering chocolate, developing Form V5, a.k.a. beta crystal, is the most desirable as it gives chocolate the best final properties.
​
While Form VI is the most energetically stable polymorph, it is not or only minimally present in freshly molten chocolate. However, all polymorphs eventually make the solid-solid transformation to the most stable Form VI. This happens over a period of time via a thermodynamic transition in every chocolate, enabling the formation of fat bloom.
There is still on-going research in this area. Many hypotheses attribute the kinetics of fat migration in the particulate structure of chocolate to diffusion and capillary processes; the actual mechanism, however, is still unclear. The mechanism we've discussed so far is called "Polymorphic transformation" and is the most accepted theory at present.

A study in 2015 sponsored by Nestle, found that the lipids, responsible for creating the bloom, move through micro pores and cracks in the chocolate body. At first, this migration is driven by capillary pressure. Subsequently, chemical migration through the fat phase takes place, inducing softening and partial dissolution of the amorphous crystalline structure in the cocoa butter. Finally, the liquified portion attains the most energetically stable phase, Form VI.

Another theory, called "Phase separation," posits that fat bloom is due to phase separation of the triglycerides within the amorphous crystalline structure of cocoa butter. This hypothesis is based on the fact that butter is a mixture of diverse triglycerides and each type of triglyceride has a unique melting temperature. At higher temperatures, the lower melting point triglycerides in cocoa butter will melt and this liquid phase occupies a greater volume than the solid. The liquid phase will then be squeezed out to the surface through fissures or pores in the chocolate. After the liquid phase reaches the surface, the triglycerides first recrystallize into a less stable form (alpha crystals), then finally through the other phases into Form VI, with bloom occurring.

Vast resources  have been devoted in the last 100 years to develop bloom inhibition compounds and techniques. These include  hydrogenated milk fat; aromatic, alkyl or alkenyl dialcohols by themselves or with hydroxyl or amino groups; crystal promoters, such as mono and diglycerides and polyglycerol esters from high‐oleic sunflower oil; lecithin and citric acid esters from blended canola oil; triglycerides from fully hydrogenated canola oil; palm stearin; and other, similar compounds.  One such ingredient,  Tropicao™ is currently available from AAK AB, Sweden.

However, due to changing tastes, health concerns, clean label requirements, or cost, most of these ingredients are no longer preferred.

Here seeding compounds, such as BOB (11,3-dibehenoyl-2-oleoyl-glycerol) and SSS (tristearoyl-glycerol) are added to produce the preferred Form V crystals.

An attempt by T. Koyano et al. of Meiji Seika Kaisha Ltd. of Japan is also described in Food Structure, Vol. 9 (1990), pp. 231-240, to replace tempering in the chocolate solidification process with a simple cooling technique using fat seed crystals. They found that the most influencing factors were the similarities in the polymorphic behavior between the seed material and cocoa butter, especially chain length. Thermal stability of the seed crystal was also found to be  very important. In view of all required physical properties, the 𝜷2 form of BOB performed best for them, as a seed material.

​Isn't food science fascinating - especially when it comes to chocolate?
​